Skip to content
Experience from the PFL-EX project as a film! 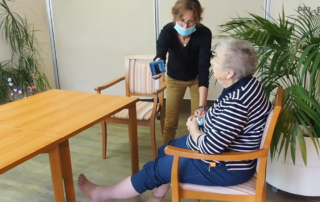 The experiences of the "PFL-EX" project, which will end in November 2020, were summarised in a 40-minute film. The film gives a voice to nurses and the management of the pilot facilities and presents some of the technologies that have been tested.

Several major events were originally planned for the transfer. However, given the corona situation, these events are not feasible. We have made a virtue of necessity and made a film of almost 40 minutes!

With the help of the film team of our project partner, the Zentrum für Telemedizin, we were able to make an almost 40-minute film without additional costs, in which some of the tested technologies are presented. The most important part of the film: It is not the scientific partners of the project who play the leading role, but the nurses of the three institutions have their say and report about their experiences!